Power Raking is a great way to remove dead debris and crust that builds up on a lawn over Winter. It's also a gentle way to remove a small amount of thatch from the lawn, without causing the significant damage that dethatching can cause.

We recommend Power Raking in early Spring, before new growth has begun. The service is especially effective combined with Overseeding, as it opens the lawn surface so that new seed can get better established. It's also a great way to thicken up bentgrass lawns, since Power Raking slices the surface stolons and stimulates new growth, thickening the lawn.

Power Raking generally involves using fixed knife type blades that slice the thatch instead of ripping it out. Using a dethatching machine, the blade height is set high so that the blades just lightly skim the surface. Unlike dethatching, Power Raking doesn't cause extensive damage, so the lawn recovers rapidly and maintains its density.

Fill in the form below and we'll have a customer representative contact you! 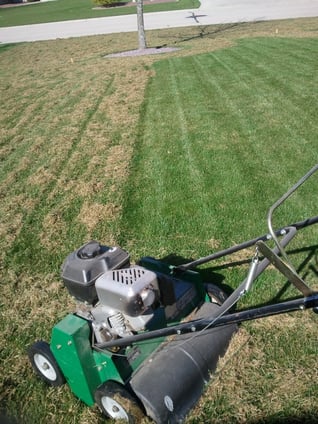 If power raking is being combined with overseeding, we recommend doing it in early Spring to allow the new seedlings plenty of time to get established before the Summer drought and heat. Late Summer or early Fall remains the optimum time for any overseeding, because you avoid the Summer heat and drought and the new seedlings do not have to compete with germinating weeds in Spring.

Contact your local Nutri-Lawn to learn more about our Power Raking service, as well as other ecology friendly lawn care services offered in your area.

We have created a series of 12 guides with professional advice and expert guidance; covering everything from how to get your lawn ready for spring to how to prepare it for winter, and everything in between.